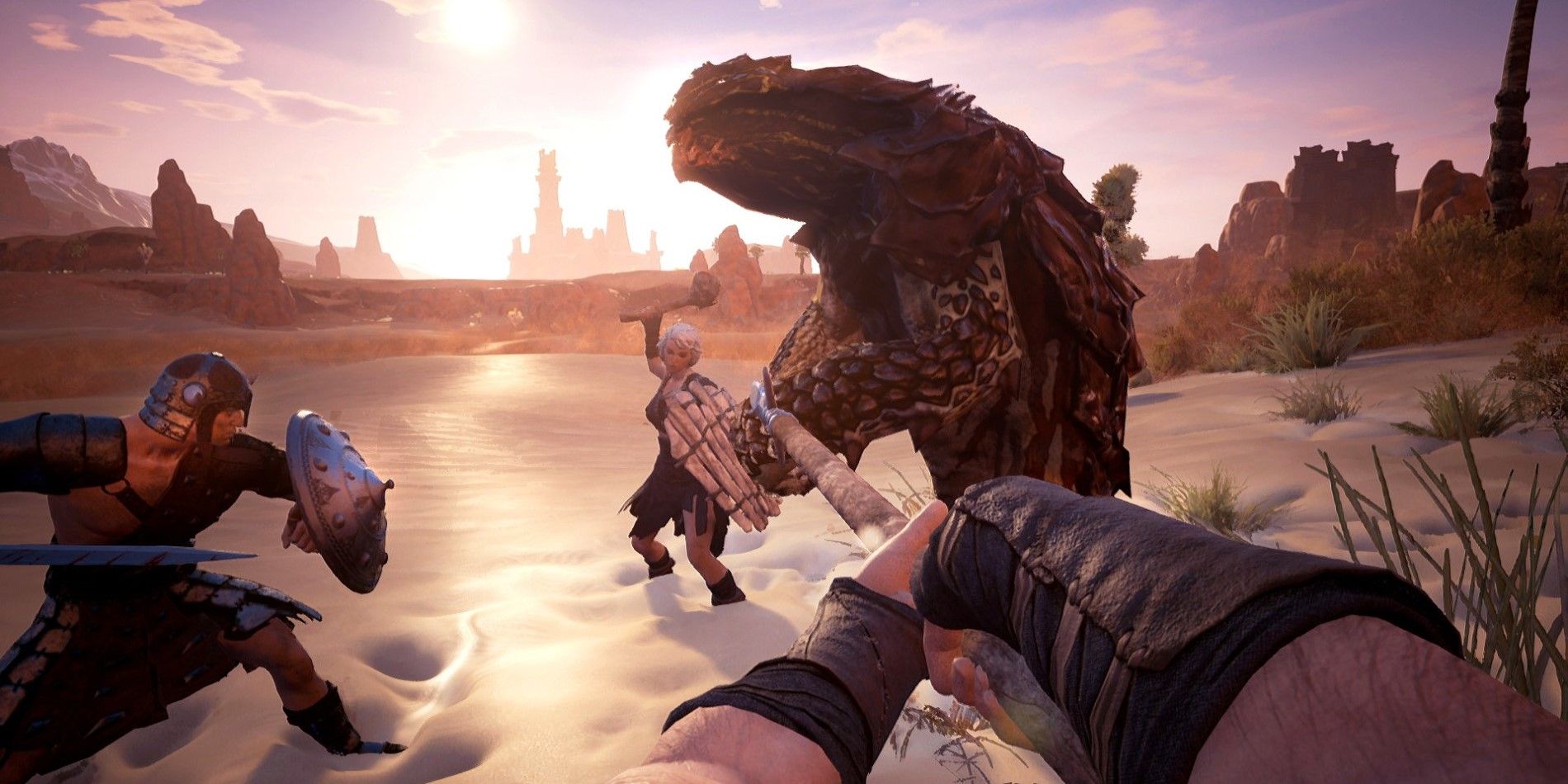 Staying alive for any length of time in a survival game like Conan: Exiles is by no means an easy feat with all the different dangers waiting to kill the player. Not only does the player have to worry about managing their health, thirst, and temperature levels, but they also have to fend off angry exiles as well as hungry animals. On top of all of this though if the player is playing online then they have to deal with bloodthirsty players as well.

Suffice to say that those who hope to make it very far in Conan: Exiles will need to stay on their toes when exploring the world. There are many important aspects to survival and players will need to create several different buildings, tools, and weapons to help them progress further into the game. This guide shows some tips and tricks for beginners in Conan: Exiles.

These will be just some general tips for surviving longer in the game no matter how the player decides to play. Obviously, things are very different depending on if the player is playing alone or against other players, but these tips should at the very least give them some good guidelines to follow. Depending on the server the game can play a little bit differently, so keep that in mind as well before using these tips.

Food and Water Are The Most Important Resources – Every single game no matter what, the player’s first priority should be trying to acquire reliable sources of food and water as soon as they possibly can. Its is incredibly unreal how many new players wind up dying due to thirst or hunger, so making sure that there is always access to these resources is very important. Water isn’t too terribly difficult considering there are rivers all across the map, and the player just has to interact with the water to drink. Food is a little bit harder though. Players will want reliable access to meat from animals, but can also eat bugs and eggs if they are desperate.

Understand The Map – In every game, the map remains exactly the same and new players will always spawn in the same location. The spawn point for all players is in the southernmost location almost directly in the center. Players will want to travel north from here to get out of the desert and into a more hospitable environment. There are several places that the player will want to avoid though until they are stronger. The Unnamed City for one is far too dangerous for new players to explore, so it’s best to avoid this place for now. Players should also keep in mind that the further north they travel the more difficult that the game tends to become.

Settle In the Center Of The Map If Possible – Once the player has managed to get their first meal and some minor tools taken care of they will want to try and move more towards the center of the map as soon as possible. The southern part of the map doesn’t have a lot of resources, and if playing in multiplayer there will be a bunch of people fighting over whatever is there. The player should instead try and move towards the center of the map. Here there will be more resources, and hopefully, any other players will have spread out further around the area. The player will also be able to find more important things like coal and iron in this location.

Make A Small House First and Expand Later – One of the very first things that a player will want to do while playing this game is getting themselves a shelter built ASAP. This is a wonderful idea, but players will want to refrain from overdoing it early on in the game. The player can always expand or build a new house later, so it’s best to start small and work up to something larger. This allows the player to get themselves out of the elements sooner, have a place to hide away from enemies, and also be able to tuck their resources away somewhere in places they can’t be stolen.

Horde Every Item Possible – It is very important that the player begins hoarding resources as quickly as they possibly can. Players will never know when they might need something, so even if they currently have no use for an item it’s best to hold onto it. The issue though is that the player only has very limited inventory space. To fix this they will need to build several chests to store things inside of their shelter. Try to have at least two or three chests early on in the game.

Don’t Carry Anything You Aren’t Afraid To Lose – One of the biggest mistakes that players make early on in Conan: Exiles is immediately donning their best armor and using the most powerful weapons and tools at their disposal. This seems smart at first, but until the player is able to reacquire those things reliably they won’t want to risk losing them. Basically anytime that players leave their house they should just consider anything currently on their person already lost, as they are very likely to get killed and looted every time they leave home. Keep that Iron Axe at home until there are a couple more locked away in a chest.

Fight Exiles and Beasts Right Away – While engaging in combat in Conan: Exiles can be a scary prospect, players will want to do it as soon as they possibly can. This is because defeating enemies and beasts in combat is one of the fastest ways to earn experience points in the game. As soon as players have a couple of weapons and some armor in their possession they should start fighting things. Try to avoid attacking other players early on, but NPCs and smaller beasts a fair game.

The Furnace, Coal, and Iron Are First Big Goals – While there are a lot of things for the player to do in Conan: Exiles, the first big goals that they should be working towards is having a Furnace and acquiring a huge amount of coal and Iron. Coal is an incredible fuel source that the player will then be able to use inside the furnace to quickly and easily smelt Iron Ore into Bars. These Bars can then in turn best used at an Armorer Bench or Blacksmith’s Table to create better weapons and armor than before.

Don’t Forget To Level Up and Acquire Recipes – In the rush of trying to survive and acquire resources, it is actually very easy to forget that completing actions allows the player to level up. With every level, the player will be able to increase their stats like strength, encumbrance level, and agility. They will also be given points to invest in recipes that will allow them to craft higher quality items. This is very important for players who want to progress through Conan: Exiles more efficiently.

Next: Everything You Should Craft First in The Forest

Conan Exiles can be played on Xbox One, PlayStation 4, and PC.

Fortnite: Where to Find Every NPC (Season 7)

Cody Peterson is an avid reader and writer. Graduated from Midwestern State University with a BA in English where he worked as an editor for the University literary journal. Currently a freelancer for Screenrant, where he spends most of his time writing guides or reviews. Be warned that any conversation started with him will probably wind up gravitating towards his two dogs, The Adventure Zone, or Kingdom Hearts 2.

Self-Defense Tactics Every Woman Should Know

Tactical Self-Defense Pen How to Make

More on Guns and Self-Defense