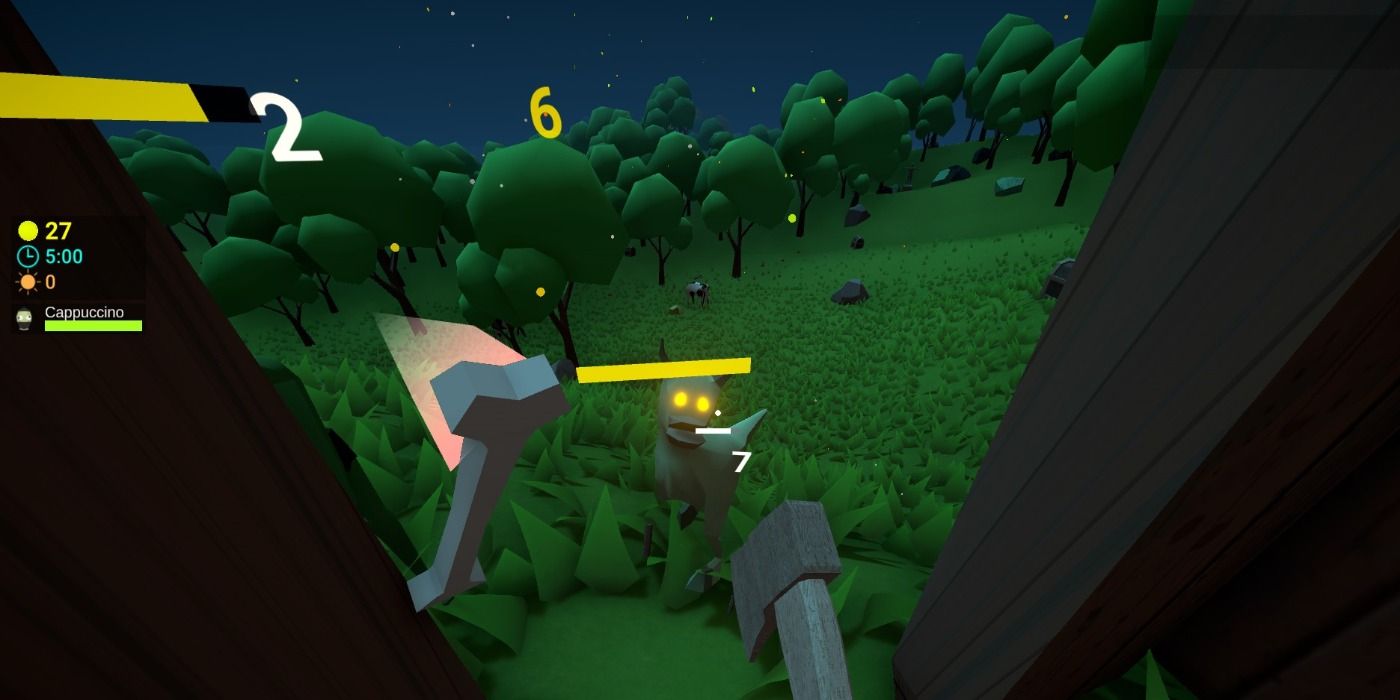 The enemies in Muck can easily overwhelm the player if they’re not careful. Here are some survival tips so players can live to see the next day.

When Norwegian Youtuber Dani was told by a comment on one of his videos that he couldn’t make a survival game, he set out to prove them wrong. Enter Muck, a free-to-play survival game that implements familiar building mechanics from other titles and combines them with a roguelike approach, where all progress is lost upon the player’s death. Players are dropped into a procedurally generated world filled with forests, abandoned buildings, and hostile foes that stalk the night.

Muck can be a rather difficult game for new players, as the monsters that appear when the sun goes down are relentless. What’s more, every time a new world is created, players have nothing in their inventory and must collect and create all their equipment from scratch. There are a number of mechanics that take some getting used to, so here’s a beginner’s guide to help players grow accustomed to Muck’s world.

How to Survive in Muck

There are a few things players can do to make survival easier in the first few days of Muck. These include the following:

Wood is an incredibly important building material in Muck that players will need to create walls, tools, and more, so players will want to harvest some of it first. Bashing a rock against a tree is the first way to get wood, but it’s far from the most efficient. After creating a workbench, players will have access to more complex crafting recipes, including the axe. By crafting a wooden axe, players can not only harvest wood much faster but also use it as a weapon to defend themselves should they come against any monsters. Of course, there are better weapons to use in the future, like swords, but the resources needed to make them are difficult to find on the first day. It’s worth noting that certain trees require different types of axes to chop. Wooden axes are needed to harvest birch trees, but they aren’t strong enough to chop fir trees. Players will want to note what trees are currently choppable and avoid wasting time striking what isn’t.

By nightfall, nasty creatures and bone-throwing ghouls will spawn that will chase down players until they’re killed. It’s important to find some method of protection against them, so building a small house with walls will keep them out. However, monsters will attack these structures to break them down. While wooden walls can impede their assault, it doesn’t outright stop them. Smaller creatures can wiggle through gaps too, so keep an eye on any holes or doorways they can enter and use those as chokepoints to fend them off. Additionally, it’s possible to momentarily slow down enemies pursuing the player by placing a wall in the way and blocking their path.

Players will have to keep an eye on both their health bar and their hunger bar, the latter of which will deplete slowly over time. It’s vital to stock up on food early so this bar does not empty completely. Otherwise, hungry players will start to take damage and die. Apples and mushrooms are the most common source of food. Players can find these items scattered around the ground. Cows, which drop raw meat when killed, also spawn in Muck’s game world. However, given that it takes time to both slay them and cook them into proper meals, apples and mushrooms will be the player’s predominant food source during the first few days.

Almost immediately, players will notice treasure chests scattered around the world. These can be opened using coins, which are dropped as loot by slain monsters and are sometimes in the green bonus chests as well. The color of the chests determines their rarity, with more uncommon chests costing more coins to open, but containing better powerup treasures. The passive bonuses they grant the player can really enhance gameplay, providing health regeneration, higher jumps, and more. Whether players want to use their coins to collect a lot of smaller treasures or save up for more expensive ones will be up to them. When stumbling upon a high-cost treasure chest, players should create a wooden structure nearby to serve as a landmark so they don’t forget the location.

Muck is available for PC on Steam.

A University of Delaware English and History graduate with certifications in SEO and creative writing experience.

10 Pro Tips for The Forest

A Survivor’s Guide to *Valguero* in ARK Survival Evolved